A military hero who returns to the U.S. with a whole lot trouble following him back. With nowhere else to turn, the man asks CTU to help him save his life while also stopping one of the largest-scale terror attacks on American soil. 24: Legacy is scheduled to debut in February after the Super Bowl, which is all the more reason for me to stay my behind at home to watch. 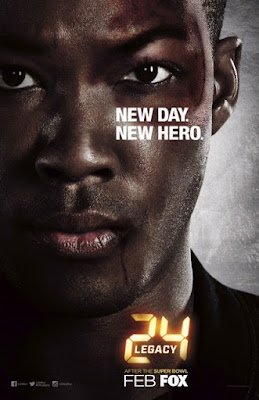 The trailer for 24: Legacy has given me 24-Kiether-Sutherland flash backs and I am all for it. Starring Corey Hawkins, Dan Bucatinsky, Anna Diop, Jimmy Smits (what's up with The Get Down though), and Miranda Otto, 24: Legacy looks to be as thrilling and action packed as its predecessor. I do appreciate that it is a brother who will be counting down the clock, but let's be honest, in this current climate, an African American male running around wielding a gun wouldn't make it 24 minutes let alone 24 hours. But I can play along with Fox on this; better 24: Legacy than Empire.

Check out the trailer below.