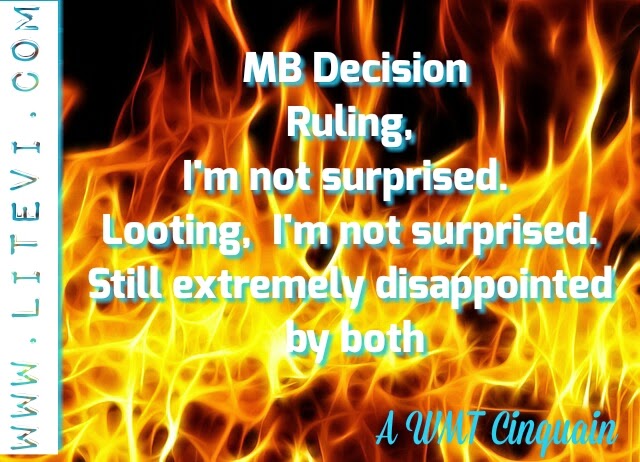 The Grand Jury ruled against indictment on the Mike Brwon Ferguson shooting case. Officer Wilson will not be heald accountable for his actions. It is unfortunate but not unexpected. Just as the subsequent looting and violence, by a few (have to stress that), in reaction is not surprising.

Both situations are dissapointing though. This case is not about one kid, one situation. It is about taking a stance for all of them and thus moving in the right direction. Unfortunately, now there is no direction as evidenced by the looting and rioting which is a baser response to the negative emotions that come from the decision. However, what I find to be the real dissapointment is the reaction by the mainstream.

The media seem to revel in the opportunity to display the short sighted, emotional and reactionary behavior (not that I condone the behavior). It is like they are saying see how these people are. What do you expect! The responses are no better. People have said, "no wonder Wilson was afraid" or "those people don't really care about that kid," and on and on. It is as if the reaction justifies the gross and ongoing injustice to our community of Black men. Not too mention that all of sudden people who do not pay attention nor give a darn about Black on Black crime (or even know about the grass roots efforts that have been going on for years to combat such things) all of a sudden want to use that as a focus point. As if because one thing exist, the other injustice by those sworn to protect should be ignored. It is frustrating and exhausting to hear these things from people who have not, nor will ever understand or live a life where prejudice and stereotypes are an everyday reality.

These things are truly disheartening, but if my fellow brothers and sisters through slavery, through Jim Crow and segregation, through water hoses and women sufferage  did not give up, nor should we in times like this.
Activism Cinquain News Poetry Political