Dayshift starring Jamie Foxx, Dave Franco, Karla Souza, Snoop Dogg, and Meagan Good is now playing on Netflix and was holding its own in the Netflix top ten movie list. Admittedly, I was not that enthused to watch this so it took me a little while to get around to it. I am glad I did though. Day Shift was a fun and exciting watch. If you are concerned about watching a horror movie, do not be. It was more action than horror, more suspense than scary. 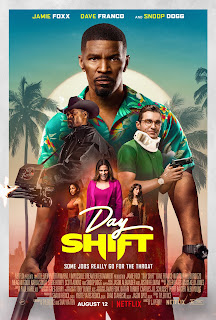 The movie follows a pool cleaner who’s doing way more than cleaning pools. Jamie Foxx plays Bud, a vampire hunter/slayer in modern California. Unfortunately, his marriage is in shambles and his financial situation is equally messed up.

The first few scenes are exciting and intriguing enough to keep you watching. The characters and storyline, though simple, gave me a reason to continue watching. Although I found Bud to be a little bit of a jerk, I was interested enough in his situation to see what would happen next.

The contrast of killing vampires in sunny California was a perfect parallel because it symbolized that even though things may look cheery and bright in life, there can also be some difficult situations going on that people want to pretend are not happening. The cast was a really good choice and all interacted well together. The cast had really strong chemistry together and the comedic timing was on point.

The combination of a talented group of actors, good backstories, and fun action sequences made this an enjoyable watch that I was able to momentarily get lost in.

More discussion on the podcast. Check it out.