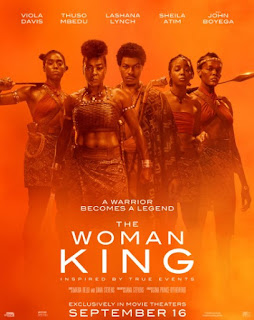 I went to see this with no expectations and didn'teven know about the controversyat first. The call for a boycott actually pushedme to go see it sooner. I saw the preview, saw Viola, and was like, going to see this. The Woman King is the movie to see. It is a phenomenal film starring Viola Davis, John Boyega, Lashana Lynch (she did that 🔥), Hero Fiennes Tiffin, and Thuso Mbedu. The Woman King is based on real-life woman warriors, the Agojie, of the Dahomey tribe during the height of the slave trade. The film follows Nanisca, played by Viola Davis, as she leads the Agojie in protecting her people. A new King is now in rule of the Dahomey people, and he has to make some tough decisions in order to save the way of life for his people.

The Woman King starts right off with an epic battle scene and keeps the momentum going with captivating storytelling. I do not think I have anything bad to say about it. The pacing was well done, giving us backstory while not completely boring us. The fight scenes were intense and exciting while being graphic but not gruesome. The dialogue and acting were superb, and the cinematography was breathtaking. The Woman King was able to show these women warriors with a concentrated level of realness. They were tough but not without their personal vulnerabilities that they channeled to make them stronger.

The film touched on so many modern issues while highlighting the very real issue of the slave trade and its impact of it on the different African tribes. They were societies that had issues and turmoil of their own and then had to contend with the Oyo (white people) coming in to trade and/or threaten their way of life.

Now about the controversy. This is a movie base on a real kingdom and real women warriors who participated heavily in the slave trade. It obviously takes creative license like all films. It presents a wonderful opportunity to research and learn for ourselves about the history behind it. I would also reccomend referencing the research that the director did. The call to boycott this film is ridiculous considering what we have watched over the years. Do yourself a favor and check it out. It is a phenomenal movie.

Listen to the podcast as I discuss more.