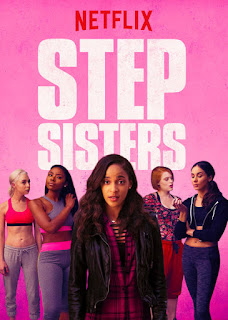 Step Sisters is streaming on Netflix and I am not sure how I came about watching this. I actually have a hard time choosing what I am going to watch on any streaming platform. I end up spending more time going through the clips, adding them to my watch list, and moving on to the next clip than actually watching a movie. But today, I was cleaning and wanted something to play in the background so I decided to watch this one.

It is definitely background-worthy. I generally don’t do bad reviews. There’s enough good programming out there that I hope to avoid anything that would actually warrant a bad review. You all already know that I can find something to like in most movies but this one here! Whew lord! I do have a disclaimer though. I am a member of one of the Devine Nine greek organizations, and that may cause me to be a tad biased.

Step Sisters is about a potential Harvard Law student who finds herself on the verge of not being able to attend if she is not able to get a white sorority to win a step show competition.

Now the beginning of this movie was very nostalgic for me. It started off with the Theta Sorority stepping on the yard. A very common thing on a campus with historically black greek organizations present. But that my friends is where the feel-good ends.

I am not going to completely drag this movie because the writer attempted to tackle some serious issues in a humorous way. Things like the “white allyship” situation, classism, people not feeling black enough and the pressure a black person may face when brought up in a certain upper-class environment. However, all the attempts to highlight those concerns are overshadowed by the gross misuse of every single stereotype you can think of. Honestly, if I were in a white sorority, I would be offended.

We first get introduced to the happy white girl who loves some chocolate, then the white boyfriend who is woker that woke. So woke that he cannot go two seconds without championing some social cause. Then we move on to the bougie black parents. Then the sorority, Sigma Beta Beta. They managed to fit every white girl stereotype you can think of and threw in the token black girl to round it out.

It was difficult getting through the first 15 minutes and honestly, it did not get much better from there. The main character, Jamilah played by Megalyn Echikunwoke, was actually insufferable. I believe they wrote her to be that way but maybe they did too good of a job. I did not find anything to like about her. She was entitled and took absolutely no accountability for her actions. And that was the heart of the problem that sparked the turn of events.

Now here is where my greek bias comes in. I felt that the writers in an attempt to send a positive message only actually served to invalidate the issues that black people have with cultural appropriation. Now, I am not of the mind that white people cannot step. If you are white and part of one of the Devine Nine greek organizations then by all means do your thing. I have met and seen performances by phenomenal nonblack steppers in these organizations. However, culturally appropriating stepping for a white sorority really does not sit well with me because it is not just about the stepping but everything that surrounds the Devine Nine greek organizations.

I get what the writer was trying to do. I just think in this case he was doing too much at first and that diluted the entire message. Now if it was built as a satire then maybe he could have gotten away with some of the stuff but it was not. I do appreciate the attempt at tackling some of the aforementioned issues though. The main one being the pressure Jamilah felt to not only rise to her parents' high standards but also try to be as black as she can because she felt her upbringing and fairer skin separated her. Because of that attempt, I give Step Sisters a 4.

Check out the podcast because I definitely have more to say about it.