Scroll down to listen to the podcast instead. 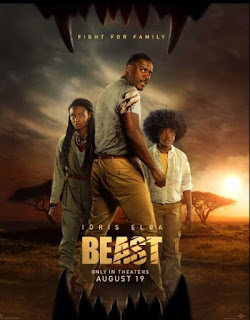 The Beast was beaten in its opening box office weekend by Dragon Ball Super: Super Hero, and I was surprised. Then again, I didn’t even realize the Dragon Ball Super was even released and because it is not my type of programming, I did not give it much thought. Nevertheless, Beast is a pretty good watch. It stars Idris Elba as Dr. Nate Samuels, a newly widowed father who takes his two daughters to his wife’s homeland in order to reconnect with them. Little does he know, he is walking into what appears to be the perfect storm of disasters. He just placed his girls in the middle of nowhere with a really angry lion on the loose, bent on revenge after losing his entire pride.

This movie was enjoyable in that it was a heart-pumping thrill. The beast, aka rouge lion, was out for blood and did not care who he got. If you were human, you were going down. The acting was solid. Let's talk about the beautiful melanated representation! An extra point five for that alone. Beast introduces two lovely actresses, Leah Jeffires as Norah Samuels and Iyana Halley as Meredith Samuels. Norah was my spirit sister. She was the practical, feisty, and seemingly the more sensible sister even though she was the younger one. I enjoyed her interaction with Idris and the other actors. The pacing of the film was well done and they used the time wisely to give us the backstory about the family and why they were visiting South Africa in the first place. 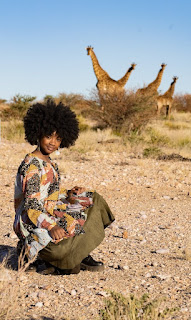 Interestingly enough, Idris’ daughter, Isan Elba, auditioned for the role of his eldest daughter, Meredith plates by Iyana Halley, and did not get the part because of chemistry reasons. I can understand that though even though she was upset over it. The relationship between Meredith and Nate was strained and had some nuances that maybe would not have translated with his real daughter. Sometimes a fresh slate is better to pull character development off.
Sharlto Copley was also in the film as Martin Battles, a good friend of the family who lived in South Africa as a conservationist. I enjoyed him in the movie as well. He added tension to the movie in all the right spots. It is a well-done movie. The only thing I think would have rounded out was to give a little more insight on why the lion was behaving the way it was. Without spoiling it, they mentioned a couple of times the length a lion will go through to protect its pride but there were some inconsistencies that could have been fleshed out a little bit more. I will go into more details about that on the podcast during the spoilers discussion.

Check out the podcast for more discussion below.