You can read the post or click here to listen to the podcast or scroll all the way down. 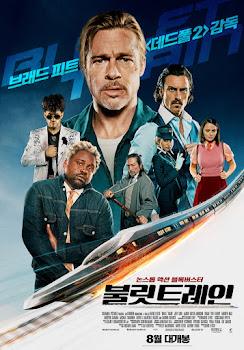 Bullet Train still holds the number one box office spot in its second week out in theaters. I had the opportunity to watch it this weekend and am pretty glad I did. It stars Brad Pitt as an assassin, Ladybug, who is just getting back to work after having some time off and currently going through therapy. His unlucky streak finds him in the middle of a very dangerous assignment. Ladybug just wants to get through this assignment peacefully and quickly but quickly learns that he signed up for more excitement than anticipated.

When I first saw the trailer for this movie, I was on the fence about wanting to watch it.

After watching a few more trailers and learning that Antoine Fuqua was one of the producers, I decided to give it a shot, and honestly, there was nothing else out that was compelling enough to watch instead. Surprisingly, I ended up really enjoying this film. Now if you are not into blood and gory killings then this may not be the film for you. It is an action-packed thrill ride that keeps you guessing throughout the entire thing. Coupled with the pacing of the film the suspense made Bullet Train an exciting movie.

The acting was on point as one would expect with the collection of actors that were cast. I was happy to see Brian Tyree Henry who I enjoyed in Eternals. Other actors in the film are Joey Kings, Bad Bunny, Hiroyuki Sanada, Sandra Bullock, Zazie Beetz, and Andrew Koji. There were also some cameos that made it an A-List affair. Although most of the setting was on the bullet train, the subplots and flashbacks allowed for some variety in scenery. The whole thing fit well together. Were there some predictable moments? Yes, of course, but I would say this was a thrilling and fun watch overall, regardless of some of the predictability. And although they were really all bad guys, I did have my favorite assassin that I was rooting for which pulled me into the movie that much more.

Lesson Learned: Be a good person, and even though you think it’s bad luck, keep going as it may be life aligning for you.

Listen to the Podcast for the rest of the review with spoilers and all.