Scroll down to listen to Podcast instead 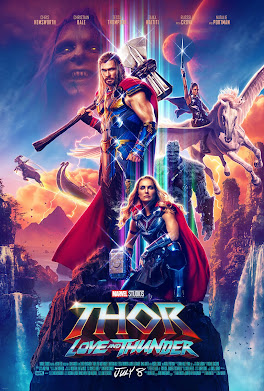 Thor: Love and Thunder starring Chris Hemsworth, Natalie Portman, and Tessa Thompson reunite some of the MCU's favorite and familiar faces. I have to admit, I was nervous when I first saw the teaser trailer and the first few trailers that were put out. It seemed a little too quirky and over the top. After watching, Doctor Strange in the Multiverse of Madness I don’t know how much more over the top I could have handled. I also was not sure about the whole Jane as Thor thing.

After watching it, I can say that I was pleasantly surprised at the final outcome of the film. It was fun and quirky and corny but in an endearing way. My daughter actually had to remind me that, it kept in line with the Thor series. Now, I know there were some complaints about the CGI, and the only time, for me, that it was most notably not great was in the very beginning … well, and some parts in the middle.

All of the elements that make a good film were pretty solid. The acting was on point, and the scenery/set had just the right amount of variety and engaging lighting, and overall cinematography. The pacing, which is always a big deal for me did not leave me wanting or bored. Even though I love Chris Hemsworth as Thor, and I cannot imagine anyone else playing the role, he was not my absolute favorite in this installment. Hemsworth really rounds out Thor in that he manages to be quirky, sexy, powerful, and vulnerable all at the same time. Nevertheless, my two favorite characters this time around are Hercules and Gorr the God Butcher. Lastly, what I enjoyed most about Thor: Love and Thunder is that the comedic timing did not feel forced.

Lesson Learned: You have to find deeper meaning in life. What do you want to fight for? You will not find that through isolation and cutting yourself off from real connections.

Now I was definitely nervous about how they were going to incorporate Jane as Lady Thor but all of my misgivings were for naught. They did a great job of bringing her back into the fold. I am bummed that she actually got cancer and died but she took ownership of her life and did it on her own terms. It was actually touching how she became Lady Thor and ultimately reconnected back with Thor. I appreciated the flashbacks of them together as they really gave Thor a little bit of humanity which further explained why he was in such an overall downward spiral.

I have to emphasize that this was a purely fun watch from the very beginning when Thor was with the Guardians of the Galaxy crew. It was enjoyable to see them together for a brief time. Those darn goats really took me out. I love how they kept the theatrical reenactments with Matt Damon and Melissa McCarthy. But I gotta say that Russell Crowe as Hercules stole the show. This is a credit to him pulling it off and the writers giving him great material.

Lastly, can we give Christian Bale all of his props? He was able to portray a heartbroken yet dastardly villain with deep gravity in the midst of all the silliness that made this installment of Thor come together.

Listen to the podcast