Scroll down for podcast 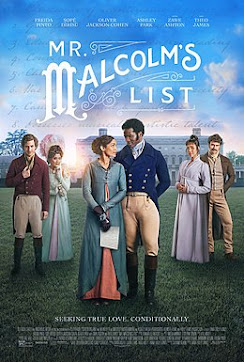 Mr. Malcolm’s List based on the same-titled book by Suzanne Allain was released in theaters this weekend. I went to see it for a couple of reasons. The first one is that I am a huge fan of cheesy historical romance novels. I used to devour them in my younger years and every now and then I indulged in them when I am not listening to an audio nonfiction book. Secondly, I had to go see it because they are clearly trying to capitalize on the whole Bridgerton diverse casting trend, and a diverse cast it was. The weekend box office just touched 1 million with it being in about 1,300 theaters.

If you are a fan of historical romances, then you will enjoy the film as I did. These novels and therefore movies are very formulaic and predictable. Every now and then a plot twist slightly surprises me but the ultimate outcome is the same. Guy meets girl, guy loses girl in some preventable conflict and guy gets girl back. Mr. Malcolm’s list was no different and yet I still found it amusing.

The setting was not as dazzling as it could have been but it was lovely nonetheless. Sope Dirisu as Mr. Malcolm was definitely nice eye candy. The two standouts for me were Ashley Park as Gertie Covington and Zawe Ashton as Julia Thislewaite. They pulled off their characters beautifully and with just the right amount of entertaining levity. All in all Mr. Malcolm’s list was a sweet and wholesome watch. I just may read the novel though to get the juicy details that I imagine may have been left out.

There is an introduction on Refinery29’s Youtube page that I would stay away from if you have not yet watched the movie in its entirety. I found the Youtube clip was a better watch after seeing the film. Although I rather liked Gemma Chan as Ms. Thistlewaite. You can check it out below.