Outside the Wire Review 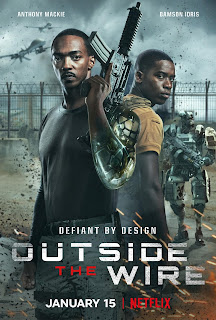 Conceptually, Outside the Wire is a cross between Training Day and iRobot, sorta kinda. If you are looking for a decent action movie that is pretty easy to follow this one is for you. I actually enjoyed this movie. The pacing was well done. I did not find myself, at any point, wanting it to end or get to the point. I thought the action sequences were diversified and entertaining. The acting was on point. Mackie, Idris, and Beecham did a great job. There were some parts with the minor characters that could have been better but it was short-lived and did not ruin the movie or even the moment. If you suspend all expectations of reality and remind yourself this is a movie set years in the future, you will enjoy it.

I did find Lt. Thomas Harp pretty annoying and downright useless most of the time. Actually, there were some pretty unintentional comical parts of the movie coming from him because I just did not understand what the heck he was doing. However, watching him fumble throughout the movie all made sense once Captain Leo explained why he was chosen for his special team. This movie once again pits man and machine against each other but this time set in a military landscape where the US is doing some dirt for the greater good.

Mackie carried this movie with some help from the supporting cast. Idris did a good job as well considering he was successful and making his character believable in his level of ineptness and arrogance all at the same time. Emily Beecham does not get enough credit for her skills.

B- It is worth the watch.

Check out the trailer.