Malcolm and Marie, released to Netflix on February 5th, stars Zendaya and John David Washington as Malcolm and Marie respectively. I watched the film a few days ago but had to let it marinate before I could write a review about it. It was a simple set up, two people, one set, black and white, and emotions. It was a good movie as far as acting, cinematography, simplicity, and writing. With that, I would not watch it again. 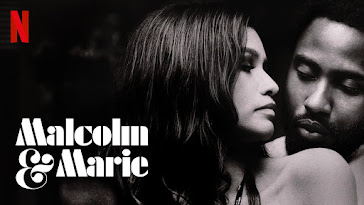 Malcolm and Marie, although a very good movie, was not my cup of tea. It is not the type of movie I would normally watch. It was way too heavy. I try not to watch those types of movies anymore. I still have not watched Kerry Washington’s American Son for that very reason.

The film is a glimpse into the life of this couple on a very big night for Malcolm in which his movie screened and the audience seemed to love it. He is high on the night’s excitement while Marie is in her head. Marie is upset and they argue about how Malcolm forgot to thank her in his speech. Then it blows up from there. The arguments reveal dark places in not only the relationship but in their individual lives that appear to be issues that neither of them has dealt with.

Malcolm and Marie played on two levels for me. One was as a representation of the lifespan of a relationship in which both persons have faults and the relationship goes through ups and downs. The restarting of the argument and making up and communicating with each other as if everything was well is just how relationships go. You disagree about things. You make up. You live life. You laugh and cry and keep going, together, because you love each other. Where Malcolm and Marie diverge is the level of toxicity present in their relationship.

On a micro level, the couple is a hot mess. They both have issues with communication and self-value. They both have inner turmoil that on the surface of this particular seem to work against each other. At the same time, it could be this dynamic that has drawn them together. They both are unnecessarily cruel to each other. Do they love each other? Yes. Is it enough? I am not sure from what was presented. There is a carelessness for the other person’s feelings that they both display, Malcolm more so than Marie. I hope viewers used this as a tool to be mindful of their own relationships and how they communicate with each other. At one point, I wondered what kind of love is this because the undertone of their interaction was tortured.

In the end, they remained. The viewer is left to imagine for how long though. We were allowed to see behind the veil of their romance, and like other relationships that we get a glimpse into, there are always a lot of opinions about what the couple should do. Ultimately, it is not our business and completely out of our hands. Normally, we would simply be there for our friends when we are needed. In this case, Malcolm and Marie are not really our friends but they represent them. Parts of what was displayed may represent all of us at one point or another. Let this also serve as a reminder to be there when needed, no matter what the outcome.

Marjorie said…
Such an emotional roller coaster. Made me reflect on my past relationship. Extremely toxic. They may love each other but they are not good for each other.
February 14, 2021 at 8:53 PM

Alethea Bonello said…
Your review echo my sentiments. I think it is worth watching once for the commentary, but could not watch it again.
February 15, 2021 at 9:10 PM