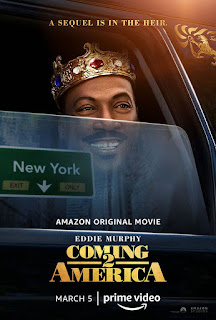 Coming 2 America is set to release in March 2021 on Prime. I am late on the reaction to the trailer that came out recently but I was hesitent to even watch it. Coming to America is one of my asbolute all time favorite movies for several reasons. First it is a geuninely funny romantic comedy with a predominatley all black cast in a time when that was unheard of. It was also the first movie that I saw in the theaters. My older brother took me to see it and it is a time, I will never forget.

Since then, I have seen the movie countless of times and have enjoyed it each and every single time that I have watched. Therfore, I have been nervous ever since I heard they were going to do a part two. How can they top the first one, or, at the very least, create a reboot that is just as good? Reboots are not usually better and very rarely just as good.

When the trailer came out, I was in no rush to watch it. However, eventually I did and it got my hopes up a little bit. Many of the same characters are making a return with some interesting extras. The jokes that were shown were cute and made me chuckle. The costumes and the storyline presented are intriguing. Dare I say that I am actually excited about it.