June 25, 2020
What are you listening to?
I have been bumping Chole X Halle's new album, Ungodly Hour. It is giving me a morsel of peace in these crazy times. I am a little biased. I absolutely love their singing style and how their voice blends together. I love how they stay true to themselves and make music that they care about instead of catering to the masses. It is so much better when an album becomes popular organically.
Chloe and Halle have shown some maturity in this new album from the musicality, lyrics, and videos. It is nice to see their progression into womanhood. From the intro, you already know they mean business. It is simple and a little jarring because they don't sound like the little girls we were introduced to from their Youtube days, doing covers.
Ungodly Hour follows their follow up to their 2018 Kids are Alright album and it is just as enjoyable if not more. The intro on the album is almost like an introduction to the new them. They do not need to ask permission to move to their own beat and make music the way they want to. This is especially significant because they are intricately involved in the production of the album with producing and writing credits.
The take away I have from this is to live fully. Live without regret. Sometimes we think too much about our next step. I am particularly guilty of this. Sometimes I think to the point that I do not actually move on to the action step that will make things happen. It takes an emboldened spirit to go for it. Be bold! Don't wait for permission from anyone. Take a chance. A little risk can provide great reward and you may not even have to ask for forgiveness at all.
I enjoyed every track on the album. My favorite is ROYL because it's a bop. The message behind the lyrics will get you out of any funk that you may be in. There are aspects of relationship pain, personal triumph, and just plain old fun. 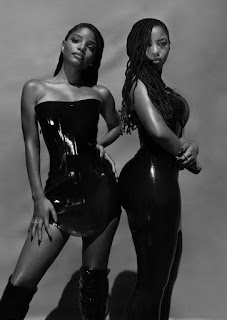 The entire album is available on Youtube for now.
Music Quotes reviews