May 30, 2020
Lil Wayne is the same person who is slowly killing himself with drugs and alcohol.
Lil Wayne is the same person who said he did not want to have any more children with Black women because he wants his daughters to have "good hair."
Lil Wayne is the same person who was baffled, befuddled and utterly at a lost for congruent, sense-making words when asked about the Black Lives Matter Movement.
Why in God's round, green earth is anyone asking his opinion about George Floyd's murder? I am utterly baffled. This man is a national artist talking about, "What am I gonna do after that?" He said, "I'll pray for you." He basically confessed that he is not interested in doing anything for anyone. Why does anyone still stan for this man?
He does not care about the culture. He used us to come up and now that he is up, he is a lap dog. He is an agent of destruction in what's supposed to be his own community. If you want to know what self-hate looks like, look no further than Lil Wayne.
His drug habits are not cool. They are a response to him ignoring his pain and issues. In my opinion, his response to our struggle is also a reflection of what is a deep-seated level of self-hate. 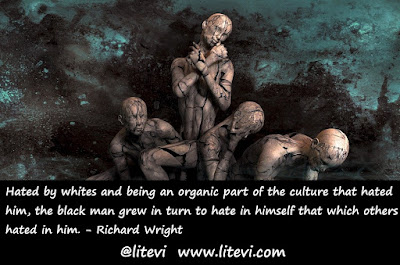 Hated by whites and being an organic part of the culture that hated him, the black
man grew in turn to hate in himself that which others hated in him. - Richard Wright
Open your eyes not only to external hate but internal hate as well. Do not drown our pain in self-medicating, figuratively and in actuality, all the while ignoring the source of our hurt. Talk to someone about your feelings. Acknowledge your coping mechanisms. Engage in stress-relieving activities. Work that mess out.
Stress management tip: Engage in positive self-affirmation. Start off with a breathing exercise to clear your mind and then repeat back your self-affirmation mantra 3-5 times while being conscious of your breath. Do this practice when you wake up and before bedtime.
Everything starts with thought. Your day should start with an uplifting positive thought about yourself and end with such. That intention plants a seed within you that you will take with you throughout your day. The most important thing is that you start to understand that you are worthy of better. You are worthy of more and worthy to fight for your life and the things that you want and need. Most importantly you are worthy of love, security, and happiness.
Confident Love self care Self Esteem Stress Less Tips stress management Stress Relief