January 20, 2020
Bad Boys for Life comes 17 years after Bad Boys II. It follows Mike Lowery and Marcus Burnett played by Will Smith and Martin Lawrence respectively as they work through getting older as hotshot detectives. Mike finds himself the target of a vicious group that wants him dead. Throw in some younger energy and you have the making of something fun for all. 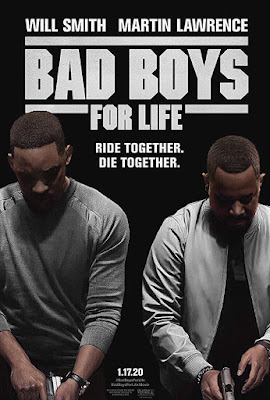 Honestly, I was skeptical about the latest installment of the Bab Boy franchise. I thought these guys are getting older, the jokes are going to be stale, and they already showed us all the action on the promotional trailers. I am happy to say that I was pleasantly surprised. The acting was solid even if the material was light. Will Smith and Marten Lawrence gave it all and the supporting cast was on point as well. There some poignant moments that I appreciated.

Martin Lawrence's comedic timing was spot on. His interaction and side commentary were just enough. The comedy was sprinkled on throughout the movie providing levity at the right moments. Bad Boys for Life had some tough scenes that would have changed the feel of the film if not for those splashes of laughter to get it back on track to a fun film.

The pacing of the movie was well done also. There are some pet peeves that I had but I will save those for the spoiler section. I enjoyed the addition of AMMO. I was excited to see Vanessa Hudgens because I have been a fan since her High School Musical days. The chemistry between all of them was fun to watch. The action sequences and car chases were not too drawn out that they got boring.

I liked that they did not try to keep them, Mike and Marcus, youthful. They did not ignore their life transitions. Marcus is a grandfather now and that life-changing event meant a great deal to him. They referenced the fact that they were older but still in a new age but also showed them adapting. That is real.

Marcus and Mike's characterization was about the same. Marcus still wants to retire even more so now that he is a grandpa. Mike still wants to ride hard in all aspects of life. We get a small view as to why he remains a playboy when he describes his one love being from when he was deep undercover.  I feel that they have been growing throughout the franchise and this latest installment was a culmination of that while staying true to who they are.

They really worked to real in the Spanish population. Whenever they want to bridge a cultural gap, follow the love interest of the leading man. I will say that I was happy Marcus remained a happily married man.

Now about that drone. I know they were trying to showcase the technology and how we are in a new age and Mike and Marcus don't always have to go around knocking doors down but let us not get carried away. They had that drone all in the gun deal and no one noticed or heard it. Also, I was aggravated that all these murders were happening and they did not show them trying to make the connection earlier. It was explained away later but they could have addressed it sooner. I just thought that they were incompetent.

Regardless of those small annoyances,  I really enjoyed this movie. It is great that it did well at the box office. I was rooting for Will Smith. I feel like he needed a bigger hit after Gemini Man. I would actually see this again. As aforementioned,  Bad Boys for Life earns a solid B. It is an enjoyable watch.