Jumanji Next Level with Kevin Hart and Dwayne Johnson

December 19, 2019
Jumanji Nex Level opened last weekend to a 60 million box office debut. All of the original case members returned with a few welcomed additions. Danny DeVito, Danny Glover and Awkwafina were enjoyable to watch in this second installment.

The story takes place about a year later, after the group has gone off to college and are now returning home for winter break. Spencer, after finding himself during the first installment, is at a crossroads and seems to be suffering from an identity crisis while the other members of the group are flourishing. He decides that if Eddie helped him before then he can help again. 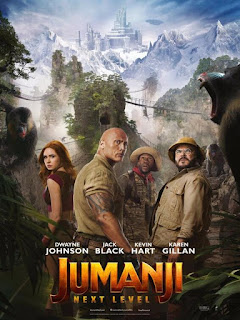 Spencer decides to bring out the busted game and go back in. When his friends discover that he went back into Jumanji they decide to go after him. Only this time, things are not quite like they were before.

With the exception of Blade II there are few sequels that are better than their predecessor. In my opinion, Jumanji Next Level is one of those. I actually enjoyed it more than the first one because although I knew what to expect they threw some pleasant variations.

How they switched up the characters while still incorporating many elements of the first movie was clever. I loved the involvement of the Dannies. Devito, Glover along with Awkwafina seemed to fit right in the mix with the chemistry of the group.

Kevin Hart and Jack Black were phenomenal. I enjoyed Kevin's performance because throughout most of the film he had to tone is usually boisterous self down to portray Milo's personality in the game. He did a great job and it was hilarious. Jack Black was impressive because he was able to play both play both of his roles, which were drastically differently, seamlessly and without being a caricature.

The pacing of the film was well done. Of course, with these types of movies, there is an expected level of predictability built in but overall, it was a fun watch. I would not mind seeing it again.

Check out my previous review