November 07, 2019
Terminator: Dark Fate had a disappointing box office and I can fully understand why. I went to see it because I absolutely love nostalgic things, especially if they are science fiction related. When I saw the old gang back together again, Arnold and Linda, I knew I would not miss it. Admittedly the trailer did a great job of selling the movie. So instead of going to see Harriet (after the backlash from us, I decided I have to go see it just to compare the movie to what is being said about it) which was automatically on the list of movies I would not see since I am trying to avoid dramatic films that will lead me to have a visceral emotional reaction, I went to see a light, action-packed science fiction movie. I was disappointed. 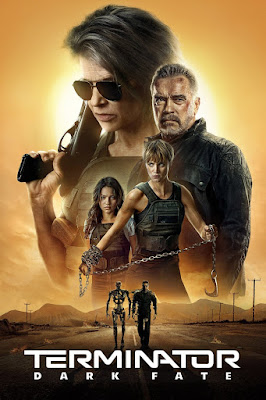 I do not really know if I can describe how I felt about this version of Terminator. I was really excited to see it because it spoke to the original movie but then they altered history and I felt some kind of way about it. The action scenes were exciting and fun to watch. The Rev-9 (newest model of the terminator) was phenomenal. I actually wish the Rev-9 had more speaking parts as the actor, Gabriel Luna, brought a little swag to the character which I enjoyed.  I had no issues with the pacing of the film. The special effects were fabulous, especially with the Rev-9 and the fight scenes.

If you are looking for diversity in a film and Hispanic then you have got it with this one. I imagine as demographics continue to change in this country we will start seeing more Hispanics get major roles in major motion pictures. I always look for the melanin though and I think we had a few sprinkled throughout ... maybe lol. They were easily missed though. Interestingly, there is such a thing as Black Hispanics; however, even in Latin countries, lighter, more fair-skinned Hispanics get the front seat and the Blacks are still marginalized in the mainstream.

All in all this film should have had a better reception; however, I did not connect with the main Dani Ramos as much as I would have liked. I think they did this film a disservice because both of the strong female leads were not very likable, especially Grace played by Mackenzie Davis. I was not expecting them to sing kumbaya but there really was no explanation as to why Grace who is human lacked a complete sense of humanity in not only dealing with Sarah but just in general.

I give it a C- because there were a lot of good elements but they failed in bringing them all together. I think the characters could have had more depth to them, particularly Grace and Dani. Sara Conner reprised by Linda Hamilton and Terminator (the first model) reprised by Arnold Schwarzenegger had more going on for them which again was a gift.

I have watched a few movies this past month where the fault was not with the acting, directing, set, location and etc but with the writing. Terminator: Dark Fate is another one.

Moral of the story: Don't give up. Don't cower and run from the fight even when it seems insurmountable.

Grace- I honestly don't understand why they made her so dislikable by the time they tried to add some humanity to her it was too late. I was not moved by her story about being alone and how Dani was the one that eventually found her. I did not really care if she lived or died. It also was annoying that she and Sara Conner took so long to get along. I did not expect them to be buddies but their whole interaction in the first two-thirds of the film did little to endear me to Grace. I cannot say that it was the acting because Davis did a good job with what she was given to work with. I would definitely see her in another action movie. She was badass.

Sara Conner- I had a little more tolerance for her because her son was killed. This whole thing was weird for me. His death gave me all kinds of timeline questions. I will admit that I always have a  problem getting timeline justifications straight. If they were successful in killing him, then how did they avoid the original future? I understand why Sara was the way she was. I actually liked her character. I just did not like how they pit her against Grace.

Terminator (original)- I do not remember what version he is. The turn that they took with this is kind of off the wall. Of all the things he could have done, he decided to give purpose to Sara and get a family in the process? It was weird honestly. And maybe I missed it but I kept waiting for them to explain away his aging. We are then to assume that he aged himself with cosmetics in order to remain hidden.

Dani- They tried to make her endearing by showing her caring for her father and brother and having a good relationship with them. I guess I did not dislike her. I felt for her and her situation. As aforementioned, it could have been anyone. I see where they tried to add a little more girl power to it by making it about her and not her womb. That part of the plot felt so contrived though.