November 12, 2019
93 Days stars Danny Glover as Dr. Benjamin Ohiaeri who has to spearhead a team's response to an Ebola outbreak in the city of Lagos. Apparently, this movie made the rounds in 2016 and I completely missed it. 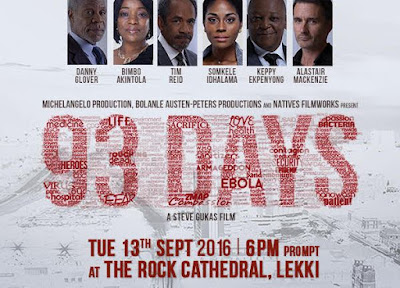 In addition to romance, action, and science fiction movies, there is nothing I love more than a good medical drama. So the fact that this was about an outbreak in a city with over 21 million people, piqued my interest right away. I thought this film was going to be about some scary viral thing that changed humans into raging zombies like 28 Days Later or something like the movie Outbreak. What I did not realize was that it was based on true events. I was actually in awe and saddened at the same time. Ultimately, this film was inspiring and eye-opening if anything else.

I do not want to hear anything about a white savior chatter because there was a white epidemiologist that was assisting with treating the people that became infected. Okay, there was a bit of that and I was annoyed at some parts how he talked, but that should not be the focus or color someone's opinion of the film. It would be a complete disrespect to the people who lost their lives and risked their lives to provide treatment and containment. The true hero of this actual event was the Dr. Adadevoh Ameyo, played by Bimbo Akintola, who was cautious enough to not back down from her instinct and fall prey to political pressure before she got the test results that prompted the people of the city to take action and stop a wide spread of Ebola outbreak. The other doctors and medical team that rallied to address the health crisis deserve all the accolades and more.

This film was simple. The actors were sincere. The writers did a good job of having us get invested with the characters. I imagine that channeling the true events of this near calamity added a level of sincerity to their acting. 93 Days tackled the hard issues behind managing a potential nationwide outbreak. The fear and concerns of the hospital staff were realistic in that they still managed to work and yet deal with their emotions and family issues.

B+ is probably based on sentimental value but I enjoyed the film and a look into the response.
It is available on Netflix.