October 21, 2019
The Joker starring Joaquin Pheonix, Zazie Beetz, and Robert De Niro follows Arthur Fleck before he became the infamous Joker that we all know and love to hate in the DC Batman movies and comics. 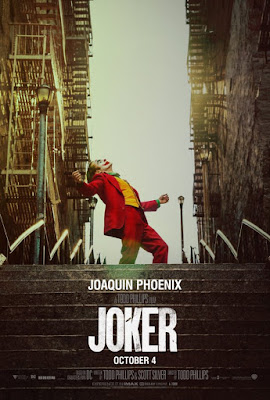 Let me preface this by revealing that I am no DC Batman aficionado. I watched the cartoons and television series as a kid and then watched the movies as they came out. Some of them were just awful but I was hooked after watching the 1989 Batman release with Michael Keaton and Jack Nicholson as Joker. When you add in the soundtrack from Prince how could I not get caught up?

Later films disappointed but the recent efforts I can appreciate. I thought Ben Affleck's Batman was perfect for what they wrote him as. Mind you, I was hating when I first heard about that casting. Needless to say, I am not going to talk mess about the new Batman cast. But I digress. This review is about Joker.

I was not going to see this because it looked so dark and I had recently (in the last two years) decided against watching dark films, tragedies, dramas, or anything that would evoke negative emotions whether it be fear or sadness. I do not mind that action, suspense, romantic comedies, comedies or anything on the light side which Joker looked like nothing light.

Regardless of my apprehension, my daughter dragged me to see it, and I am glad that she did. It started off slow but I was still interested. I cannot tell you about the accuracy or relevancy to the actual Batman comics. I just enjoyed watching how he came about and a peak back at the pivotol moment in Bruce's life. I do think Joker should have been a touch younger but then we would sacrifice Joaquin in the role and that would not be worth it.

The acting in the film was on point. Joaquin but the movie on his back and marched on like it was nothing. I enjoyed seeing a different side of Gotham. The regular working folk side. The downfall of this movie is that outside of Joaquin there wasn't much there. I was pleasantly surprised with Robert De Niro's presence, mostly because he is Robert De Niro. Other than that, his presence was not spectacular.

Before I get into the soilers, I enjoyed this film more because of the social commentary aspect than anything. Even though it was set in the early 80s the parallel to current times was well formulated. The movie was good. B+.

Moral of the story: Be kind to each other, it may save your life.


SPOILERS AHEAD
Enjoy the trailer before getting to the spoilers
Can we talk about the bullying of Arthur? So many people pick and pick and pick on folk without knowing what they are going through and social media makes it easier to do because we have a sense of anonymity.

What about the video clip that was shown of Arthur when he attempted to do stand up. He thought he was going to get praise but instead everyone was laughing at him. That is the equivalent to our modern-day viral video. Again compounding on the bullying.

I liked that one scene when they panned away from all the monitors. It reminded me of all the computer screens of today and how our need for funny ongoing viral content is really causing further separation from humanity while at the same time keeping us in a box.

"The worst part about having a mental illness is people expect you to behave as if you don't." -Joker.

This quote was so accurate. Are we not all guilty of this. We do not want to acknowledge or accept that someone is struggling and that struggle makes them a little different because that, in turn, makes us uncomfortable.

Randall- Randall was a jerk. Another bully that I wanted to get beat up. Maybe punched in the face or kicked in the balls. The way Arthur murdered that man was unexpected. Thank goodness the Gary was nice to him or else he would have been dead to. Gary went over because he was genuinely concerned while Randall only went over to make sure his name was not caught up in any mess.

Even though I have so much more to unpack in this film because there was so much, I will end with mother and her mental illness. I was sickened by the way she treated her child and the fact that they let her have him back. This is the case of nature vs nurture and there was no real nurture. I knew she was going to die by Arthur's hand when he read those files. At this point, he was already off his medication for a while and all the way gone.

Even though he had a hard, messed up life and stopped taking his medication, it is not an excuse or cosign on him becoming an unhinged person that kills for sport and because it feels good. I'm just saying ... I understand.

I have so much more to say about this film it will have to be on the podcast. LOL.
Movie review