In the Shadow of the Moon Movie Review

October 10, 2019
In the Shadow of the Moon stars Boyd Holbrook, Michael C. Hall, Cleopatra Coleman and Bokeem Woodbine in a time-traveling thriller that tries really hard to keep the audience on its toes. 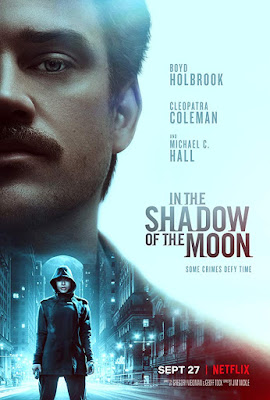 Can we talk about Bokeem Woodbine? This dude is a solid B (that might be pushing it, okay C) actor. He really should get more acting jobs because I really think he can handle whatever comes his way. He handles that 80s hair number like a pro in this movie. His hairline was all kinds of jacked up 😆. I tell you this, he may not be an A-list actor but he stays working, and that is the most important thing. Truthfully, the only reason he is not an A-lister is because he has not been given the right part in the right movie to explode. He is a strong actor even if it may be slightly over-the-top on occasion. I do enjoy seeing what he will pop up in next.

Cleopatra Coleman as Rya was a delight. I look forward to seeing her in more works.

The movie follows detective Locke, played by Holbrook, as he chases down a serial killer that unbeknownst to everyone is actually a time traveler that is trying to avert disaster in the future. There is a twist towards the end of the movie that I won't give away but I was not really surprised about. Netflix gets points for trying.

I annoyingly appreciated Locke's character development. It was very plot-driven but appropriate. It was annoying only because I wanted him to be better, looking like a homeless beggar throughout most of the film LOL. I think my favorite aspect of this film is the actual killings themselves. Now there were some plot holes, but you have to accept a certain level because it is a movie after all. However, overall, I found this film enjoyable.

I thought the pacing of the film was well done. The plot was strong enough to keep my interest. The beginning definitely pulled the audience in enough to keep us watching. The acting was decent enough that I was not distracted by bad acting. The cinematography was done well also. Nothing earth-shattering. Just a solid film, although, I wanted something a little more at the end but not quite sure what. It was not that feeling of I wish there was more movie because I enjoyed it so much but more like, "that's how it ended" or "that's it?"

Lesson Learned: Sometimes you may not be ready to face what you're chasing, and is it really worth throwing away the blessings of the present.

In Locke's case, he did not derail his life because he was living with both the past and the future as his burden. He could not let go of the outcomes of the past which cause him to bypass his life in an effort to make amends in the future. He was the epitome of not living in the present.