October 15, 2019
Gemini Man, starring Will Smith is going on its second week of release. So far it has a worldwide gross of just over 62 million, which is probably disappointing considering the budget. 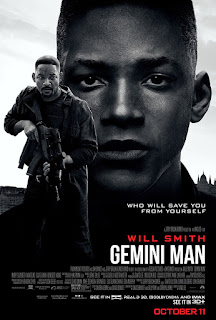 It is about an excellent government assassin who decides to retire. Unfortunately, as these things go, he becomes the target of a new and improved assassin who turns out looking and reacting just like him.

So for this review, I have to revert back to the what-I-love versus what-I-hate format.


The film had the potential to be great. It seemed to have all the right ingredients. Unfortunately, you cannot have a great film if the writing and plot is crap. It could have been a B+ but actually earned a C-. Clive Owen as the villain could have pushed it to a solid C, maybe even a C+ but he was regular. He was not bad but he was not impressive. So C - it is.

It pains me to say you can wait for this one to come out on video.

Moral of this story: Never give up on yourself even when it's your ownself fighting against your best interest.