October 31, 2019
Black and Blue stars Naomi Harris as rookie cop, Alicia West, in New Orleans, who's idealism does not quite fit in the post-Katrina corrupted landscape. The film also stars Tyrese Gibson as Mouse, Mike Colter as Darius, and Frank Grillo and Malone the more than crooked, crooked cop. 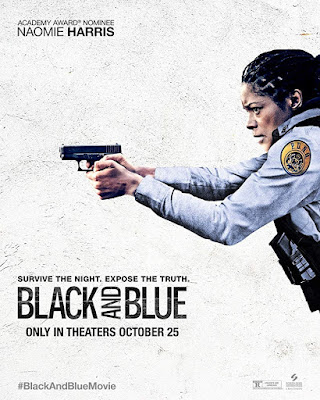 West finds herself in a life or death situation because she accidentally witnesses a narcotics police officer killing some neighborhood street kids. She has nowhere to run or hide as the community is not willing to help her because she is a cop.

I knew from the first few seconds of watching the trailer that I was going to see this movie, mainly because Naomi Harris was playing the lead. I was first introduced to Harris when she played a role in 28 Days Later, a horror movie about a virus that turned humans into deadly monsters. This movie was released in 2002 and Harris was a badass. I then watched her in Sky Fall, Collateral Damage and, most recently, Rampage. I really enjoy her as an actress and I enjoyed her in Black and Blue.

The backdrop of New Orleans after Hurrican Katrina (2005) was interesting in that it spoke to how parts of the city, the poorer neighborhoods, never fully recovered and how that impacted the current state of things. I thought the set could have used a touch of character which I found lacking. There was opportunity to make the physical landscape more compelling in the film. This did not take away from the pacing which I thought was well done.

There were a lot of blatant plot points that were placed to keep the story going. I could have done without them some of them. Most of the acting was well performed. The movie predominantly had B actors that are strong in their skill but have not received high recognition. They held their own. There were times when I felt like I was watching a thriller and was kept on the edge of my seat. It was heart pumping just enough to keep my theatre audience fully engaged. They were cracking me up with their clapping and outbursts. Harris did an excellent job. Her character was awkward and out of place. She did not quite fit in anywhere, and given the backstory, I could understand why it was played that way.

I was told that Black and Blue was like another version of Training Day, released in 2001. I do not remember much of Training Day except that Denzel Washington played a crooked narcotics cop and they had a showdown towards the end in a bad neighborhood where the people turned against him. There are definite similarities. Even still, I enjoyed the insertion of the issues with police brutality and the reminder that the people of New Orleans have suffered and in some neighborhoods are still suffering post-Katrina. 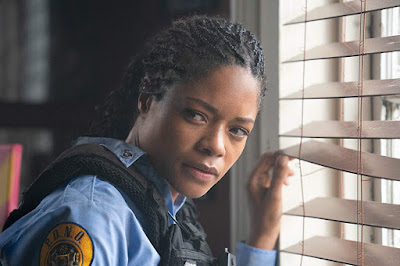 Alicia West, as aforementioned, was very awkward and out of place. Even in the beginning, this was exemplified by her being stopped by a fellow police officer. She really did not fit in anywhere but came back to her home town to try and make a difference. She was badass the entire time. They underestimated her survival skills and thought she was just a rookie cop with no prior experience when she actually recently came back from the military. I think they should have found a way to exploit that even more and showcase some of those skills, in addition, to her precision shooting. Even still Harris is always a pleasure to watch for me.

The movie gets a C+ from me.

Moral: Do not let your pain and suffering cloud your judgment and render you unable to move forward on enact change in your life.

Darius was a somewhat competent idiot. In all honesty, this movie could have been cut shorter several times but as I mentioned, plot points. How is it that he automatically believed Malone? It does not matter if the cop never lied to him before. He did not think it was fishy that Malone was giving her up? He should have had some level of doubt and try to learn the truth himself. I can only say that maybe his grief clouded his judgment. He came off as an idiot and his death was disappointing. The dude is huge and could not win against Malone?

Missy played by Nafessa Williams annoyed me to no end. I highlight her character just to point out how hurt can really turn someone against you. She too also let her pain control her emotions and decision making. She did not care to see reason or expect better from Alicia West because she was so hurt that West left her when they were younger. She shut her out completely and beyond that want to see her killed even after they reviewed the body camera footage that showed she did not kill Darius' nephew. Her pain consumed her.

Go check out the movie. Directed by Deon Taylor, a Black director, writer, and producer, who also directed Traffic. It has a diverse cast and will give you some thrills.