47 Meters Down Uncaged
Four teenage divers discover that the sunken ruins of a Mayan city are also a hunting ground for deadly great white sharks. With their air supply steadily dwindling, the frightened girls must navigate the underwater labyrinth of claustrophobic caves and eerie tunnels in search of a way out of their watery hell. 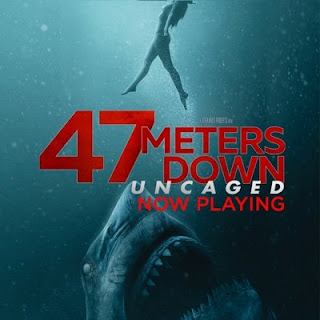 47 Meters Down: Uncaged stars Sophie Nélisse, John Corbett and a cameo from Nia Long who still looks absolutely fabulous. Basically, four silly girls find themselves stuck in an underwater Mayan city but they are not alone. Great white angry sharks are tearing the underwater archeological site apart and some human limbs too.

The thing about this movie is that it’s annoying in the girls’ foolishness. So just expect to be annoyed at the poor decisions they make that are necessary plot points to move the story along. After I got over that, I actually enjoyed this movie. It is a thriller and there were some scare worthy moments when the sharks, who have no cares to give, attack.

Mia played by Sophie Nélisse is supposed to be the underdog that we feel story about but ends up being a badass.

John Corbett plays the archeologist dad. I like him in almost everything he does, so I was rooting for him not to die but …

Nia Long plays the mom and she gets an honorable mention because … well, she fine.

Nicole played by Sistine Stallone gets just what she deserves. I don’t remotely feel bad for her appropriate demise.

Sasha played by Jamie Foxx’s daughter, Corinne Foxx, turns out to be pretty badass herself. She did a good job with the acting too.

I give it a solid C+ because there were some unexpected moments with man versus nature that I appreciated and did not expect.

Moral of the story: Don’t stop fighting until your very last breath and even then go for the reserves and keep fighting. Also do not treat your family like crap, at the end of the day they are sometimes all you’ve got.