December 27, 2018
Have you watched A Quiet Place meets The Happening? I mean Bird Box. 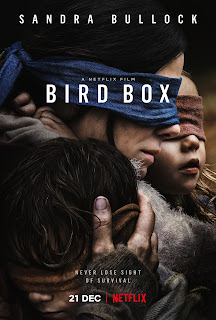 I love Sandra Bullock. I have not watched her in a film in a long time. I actually watched her in Oceans 8 and Gravity which was years ago and a long time for me. I was excited to see her in another project. I was also happy to see Rel. Now he is someone who took advantage of the exposure he received from Get Out.

Bird Box had a strong cast of actors. Most of them have been in the game for a while giving strong performances while going under the radar, so the acting was stellar on all accounts. There has been a lot of hype going on about this movie via social media so some people have high expectations. The memes are hilarious and I can relate, especially to the one about Girl and Boy not following directions. However, if you are looking for something scary on Get Out level, you will be disappointed. 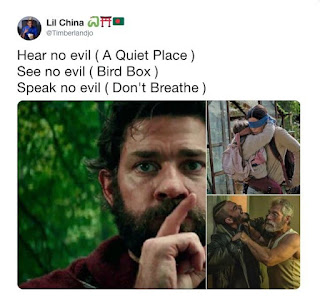 The storyline is very similar to the Happening except the Happening provided us with a reason for the phenomenon where Bird Box did not. I believe this is done purposefully as a set up for part two. People want to be able to make sense of what is happening and that was a big missing piece. The other movie that it reminds me of the A Quiet Place because of the natural backdrop, removal of an essential sense, and the concept of doing all that you can for your children. It was also very suspenseful like A Quiet Place.

Personally, I cannot watch movies like this anymore. My nerves cannot handle it but my daughter pushed me to watch so I was able to get through it by asking her lots of questions LOL. It was entertaining. Solid 3/5 stars for entertainment value only. There is quite a bit of reality that one must suspend to fully enjoy it. There are some plot holes that need to be addressed if they pursue Bird Box 2.

To go into a little more detail.
Sandra Bullock as Mallorie was cool as heck. Her character actually had layers but you had to pay attention to understand it. She is like those parents that love from behind the veil of protector and sometimes cannot has an emotional inability to separate the two. In the end, she softens up.

Trevante Rhodes as Tom is just fine. I have not followed his career so this is the first time I am seeing him and his acting was on point. He was badass till the end. Unfortunately, I felt like he was a prop. He played the character well but as it was written did not really bring any depth to the story. He could have been anyone. He went out like a G though.

John Malkovich as Douglas was the MVP even though he died like the rest of them and he forgot to use the shotgun at the supermarket but I am sure that is because he was too drunk to get his act together. However, he was like a darn oracle up in there but no one listened to him. 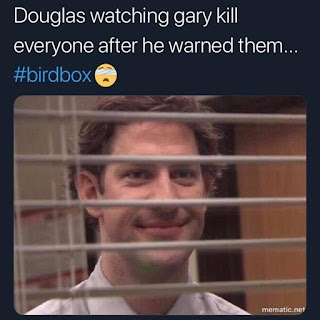 Lil Rel Howery as Charlie got a bad deal. He was cool AF. He also was dropping truth about the origin of the "toxin" (in my head it will be revealed that there is some truth to what he is saying if they ever do a part two) and he told them about the supermarket. Charlie specifically told him he did not want to roll with him. Then because Douglas drunk behind didn't think to shoot the crazy guy, he sacrifices himself. That was an unnecessary loss of life.

Malorie's birds were some supernatural type of birds. Those were the true champions. They survived being put in a freezer, the river, the box ... what was she feeding them.