Netlix's Bright with Will Smith 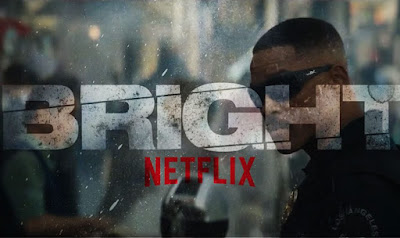 Bright is Netflix's first foray into major big budget films for the digital screen, starring Will Smith. Bright takes place in an alternate modern day where elves, orcs, fairies, humans and all other sorts of beings coexist. It is a day in the life of two cops that find themselves caught up in saving the world from a dangerous evil as they protect an elf with the magical wand that if it falls into the wrong hands can spell disaster for all.

To start of, Bright received horrible critical reviews. They tanked the movie. Part of me wonders if it was because overall Bright has cops looking like crap. At any rate, it is a good thing it was free because I doubt so many people would have watched it. I would have attempted to watch regardless of the critical bashing only because of Will Smith. However, I almost did not get through it. Why? Because he was not married to a sister. In fact where were the sisters? In this day in age where Black woman have to look deep within for self-esteem and positive imagery, I am over the subliminal messaging from the media that we are not beautiful, worthy, or valued. Therefore, I was annoyed that a leading African American male has to once again be partnered with a non African American supporting actress. However, I pushed through.

Bright was quite ambitious. There were several layers that were being addressed in this film that intrigued me enough to end up actually enjoying it. First they attempted to address racial issues which were beyond Black versus White issues. At the same time, Bright addressed class issues while also looking at a corrupted criminal justice system and gang violence. Throwing all that together in one movie was impressive. I actually would have been fine with it being two or three films in order to build more of a back story because there was certainly enough material.

As far as basic movie elements like cinematography, pacing, dialogue, acting, and plot it was all decent. The pacing of the film was well done if not even a tad rushed for some aspects. The chemistry between Will Smith as Ward and Joel Edgerton as Jakoby was right for the film and characterizations. Will Smith portrayal of a worn out, emotionally tired cop was well done with just the right amount of cynicism sprinkled in. I enjoyed Noomi Rapace. She was bad ass, and I had recently finished “What Happened to Monday” so again a little biased. The villains were single minded and brutal and were coming from every corner, cops, gangs, elves, etc. I am no doubt biased because I happen to love fantasy films and I am a fan of Will Smith's.

Overall, Bright was a solid B- for me and that's because it should have been a trilogy. All the elements were there to make it a powerful fantasy contender. Maybe a little Black girl magic would have put it over the top 😏😉.
Movie review Movies SciFi