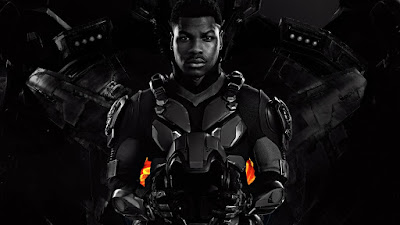 Pacific Rim came was released to theaters about 4 years ago. It got fair reviews but being that me and my household (okay just my son and I) are lovers of science fiction and action movies and we loved it. So imagine my excitement when the trailer for Pacific Rim 2, Pacific Rim Uprising. Not only is the trailer a good one but Mako is still in it, looking like a boss, and they added John Boyega! Side note: It is really a shame that Charlie Hunnam's movie career (or just plain old career) did not take off as people hoped or expected (The Lost City of Z box and King Arthur both box office bombs).

Special effect on this look great. I love that the two crazy scientist are back. Not a fan of Scott Eastwood although I did like his character in the last Fast and Furious installment. Not really sure what he will bring to the table.