March 28, 2017
Life starring Jake Gyllenhall, Rebecca Ferguson, Ariyon Bakare and Ryan Reynolds is a scientific thriller with an Alien that basically could give two flying figs about any life form other than itself. Six astronauts are aboard a space craft making the important discovery of alien life. It is a nice diverse group of people all holding hands, singing, “kumbaya, we are about to change to world.” All is going well until it turns bad really fast. 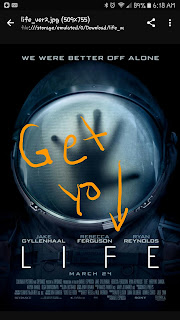 Ryan Reynolds plays, Rory, the same character he always plays in almost all of his movies. That is really all I kept on thinking about as I watched him. That and he is the cute white boy with all the snarky jokes. Ariyon Bakare plays Hugh, the scientist who seems to have bonded with the life form (named Calvin) early on as he is the researcher bringing it to life and caring for it. So much more I would like to say and ask but don't want to spoil it. Jake Gyllenhall plays the reclusive (so much so he has decided to practically live in space) David, who could care less about getting back to earth because we earthlings suck. Rebecca Ferguson plays Miranda, who's responsible for containment. Clearly, the savage alien was not contained or we would not have a movie.

This film is an adrenaline pumping thrill ride. I watched it with my daughter and was a little concerned about some of the potential R-rated content at first but there was nothing that I felt, I had to cover up her 11-year-old eyes for. Life had a nice build up, a good dose of suspense and one bad ass alien.

Definitely worth the watch. Is is predictable? Well, yes. If you are a scifi lover than, you won't be surprised. Nevertheless, it is a fun watch. If you have heart conditions though, you might want to take a pass.

Moral of the story? Sometimes ignorance is bliss. Ultimately, life will find a way and won't give up. If you want to accomplish something and start to feel discouraged, think about life, our existence. Think about the miracles of creating a baby. Think about the cell. Life is in you. You are life. Be like Calvin minus the brutal, unfeeling, I will kill anything around me to survive mentality.
Movies Perseverance reviews