November 07, 2016
Doctor Strange: How far will you go to get your life back?
Dr. Stephen Strange's, an arrogant world renowned neurosurgeon played by Benedict Cumberbatch, life get tossed upside down after a car crash robs him of the use of his hands. After months and depleted funds with no promising improvement of his hands, he is desperate and seeks help from someone who was miraculously healed from an irreversible spinal injury. Strange's journey finds him in an Asian  land, learning about astral projection, spirituality, energy and dark forces.

Doctor Strange, staring Tilda Swinton, Benedict Cumberbatch (Doctor Strange), Chiwetel Ejiofor, Rachel McAdams and Mads Mikkelsen, is reminiscent of Inception were some of the special effects are concerned. It is also more entertaining than I expected. I only remember Benedict Cumberbatch from Star Trek: Into Darkness when he played Khan. That role was done so well that I actually disliked him; therefore, I did not go into this film with much of an expectation. Since I had no idea who Dr. Strange was, which my son (a big Marvel, DC, any super hero fan) looked at me like I had fallen into a vat of poison and grew two glowing heads for my lack of knowledge, I was only going because my kids wanted to see it and I happen to be a fan of science fiction and Marval anyway. 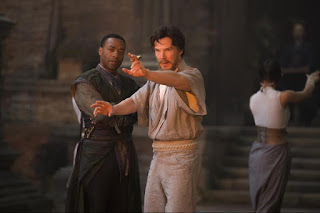 I did not regret going. The kids enjoyed it. I enjoyed it. The characters all fit well together. The comedic timing was well done. The special effects and cinematography were top notch. The acting was appropriate, not over the top and not underwhelming. The evil doer, played by Mikkelsen, was not very memorable (which is a shame because he is a really good actor) but acceptable and played the part. He was like a footnote to push the story along. The evil entity was more impactful and he was only onscreen for about five minutes. To sum it all up, as my son said, "Doctor Strange was a great movie!"

The take away from this is about perseverance and willingness to change. How far will you go to get your life back? What are you willing to give up? How hard are you willing to fight for what's right? When you get there and it is not what you expected, are you willing to change your expectations for the righteous path? I am not talking about what everyone else says is right for you, or what society dictates is the right thing to do but what you know  in your heart is right, following your conscience.  At the end of the day, we have to be willing to accept where life takes up, assess it and decide what are we going to do about it.  We have the power to change our circumstances and live in a new normal that is forever changing and growing with new life challenges.

As great as Doctor Strange is, the message is even better!
Faith Movies Perseverance Pop Culture reviews