October 12, 2016
Ava DuVernay’s Netflix film ’13th’ shows how mass incarceration is a form of modern day slavery. The documentary is definitely worth the watch. It is moving and powerful and thought provoking. However, with the political climate as it presently is, it inspired a feelings of disappointment, despair and downright anger. Hands Up, my latest cinquain, best describes how I felt at the end of it.

Hands up
Shackled
in darkness my
intelligence is mocked
Speak not, breathe not, live not- Be a
shadow 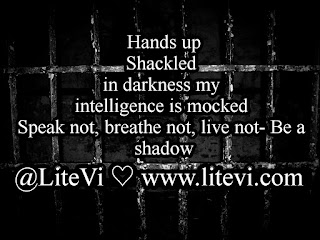 It breeds disappointment in our fellow human beings. At the same time, I think I should not be so disappointed because people were once enslave, children used as gator bait, people were experimented on and thought of as subhuman because of the different color of their skin.
Have we not grown in compassion and empathy? It definitely feels like we have not because greed and selfishness seem to rule the way of the world.

I am disappointed in those that only stand by to lend blame, point fingers, and ridicule instead of looking at the problem and working on finding a solution. This climate of hate and apathy creates a feeling a despair, not in those that are suffering or trying to be better but in those that are supposed to be our brothers and sisters in humanity. There is absolutely zero hope to be found in those individuals who would rather spew hate than compassion. Do not look for it. Leave them with their hatred and lack of empathy. Do not even waste anger on them. Instead direct the anger towards the political systems, jail systems, school systems. Channel it and use it to motivate change in a positive direction. Take that anger and have it move you to action. Be a mentor, get an education, start a business, participate in a protest, write about it, tweet about it, sing about it, talk about it, vote, call your political representatives, sign petitions, teach your children, read a book or two or three, spend quality time with your children, teach ... however you choose to take action, TAKE ACTION. We are worthy of the effort. Our society, our existence, our future as a nation depends on it.
Activism Cinquain Dream Big Give back Goals Poetry Political Preserverance Self Esteem We Fall Down