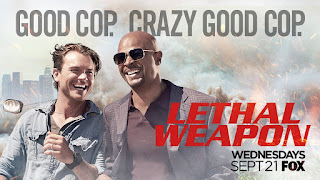 When I first saw the previews for this, I thought why? It looked a little hokey, and I was skeptical that they could do it justice. However, I did want to give it a chance though because an affinity for Damon Waynes, what with In Living Color, My Wife and Kids, and, of course, Major Payne in his list of comedy credits.

After watching the second episode, this is one show that will be on the television rotation. It has a combination of feel good with action packed car chases, shootings and fist fights. The normal Black family love, without anything extra (meaning just regular kids and parents and love) is also a beautiful thing to see. Throw in crazy Riggs dealing with his grief and you have an assortment of material to make a watch worthy show. Add the ray of sunshine from
Keesha Sharp's (Muetaugh's wife) big beautiful smile along with Jordana Brewster's genuine, yet sexually charged (or maybe that's just my got-to-find-romance in everything self being presumptuous) attempt to heal Riggs for some female power action and it is a thumbs up.

Take away:
Family and Friends
Bloodline
is worth living
for and friendship reminds
us to keep pushing despite the
set backs