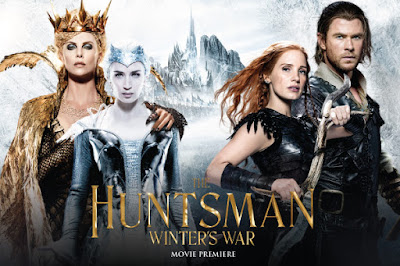 Chris Hemsworth is back as the huntsman in the aftermath of Snowwhite successfully killing the evil queen, Ravenna. In this installment, the viewer is treated to a little history lesson of not only the huntsmen and where they came from but we also get some background on the Ravenna and her sister Freya, played by Charlize Theron and Emily Blunt, respectively.

If you enjoyed Snow White and the Huntsman then you will enjoy The Huntsman: Winter's War.

The things I did not love
- Kristen Stewart's portrayal of Snow White in the first movie was pretty abysmal, so I was glad they did not bring her back, but I would have liked a little more than a passing mention of Snow White in this one.
- not much else that I did not like. It was a fair film.

The things I loved
- Emily Blunt as the Ice Queen was just the right amount of manufactured evil and vulnerability that the role called for. She did a great job of capturing Freya's pain. It was poetic that she became the Ice Queen. I hated that I despised her.
- plot twists. There were some interesting turn of events that were a surprise to me which added a nice layer to the story.
- Charlize Theron as Ravenna is still an evil, vile mastermind. Her skills seamed so effortless. Love to hate her.

All in all, it was an enjoyable watch. The film is a good B-. It is a middle ground film, nothing too spectacular but nothing going on to have it hated or unwatchable. It is worth the DVD time.