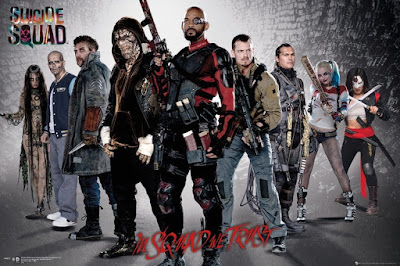 Suicide Squad starring Will Smith, Margot Robbie, Viola Davis and Jared Leto grossed over 135 million this weekend. They got my money and would get it again, but I would rather watch it at home the second time around so I can fast forward through Jared Leto's version of The Joker. Yikes!

There are so many good reasons to see Suicide Squad, The Joker is just not one of them. The short time he was on screen was like torture, but not the kind the makers intended. It is actually a good thing that a lot of his scenes were left on the cutting room floor.

The things I did not love:
- The Joker ... that is all.
- Common's cameo. What the heck was that?
- The witch's body ticks. Was I the only one that found it distracting? What was going on with that?

The things I loved:
- Will Smith as Dead Shot. Probably deserves its own blog post.
- Viola Davis playing Annalise Keating aka Amanda "I will cut your throat while you're sleeping" Waller. She knows how to play a character I love to hate.
- Margot Robbie playing Harley Quinn. The chick worked the heck out of that character. HQ is not the brightest when you consider how she ended up with the Joker but that chick is bad ass. Who doesn't like a little crazy. Her comedic timing was on point.
- pacing. I am big on the pacing of a film. The movie goer should flow through the film oblivious to time. If I huff and puff and get bored with a scene then something is off. Suicide Squad had on point pacing.
- Ike Barinholtz as Griggs. He was just icky. He did a great job at being icky.
- Katana. I think I liked her because I watched Heroes Reborn. I like kickass chicks.
- the Justice League hints.  Hint hint. Get it.
- Okay fine. All the bad guys on the squad.

Overall, I enjoyed it. Solid B. It would have been a B+ but that darn Joker and some holes in the plot.
Movies reviews