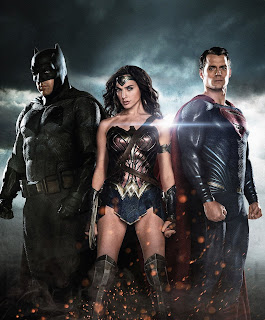 The best thing about Batman V Superman was Wonder Woman! Now that chick was impressive. This is one of those movies that is redeemed by the ending. I can definitely say that I was skeptical about Ben Affleck as Batman but for the direction they went, he was actually quite good. He was brooding, dark and menacingly silent. The tortured soul.

Henry Cavill as Superman is not my favorite. He is nice to look at, but I have been turned off from the so so remake. At any rate, he is solid in the characterization of Superman. He too played the role as it was designed.

The things I did not love:
Time to move on to the good stuff. The things I loved:
All in all, it was worth the watch. Now, I am not so patiently waiting for the Justice League. In the meantime there are plenty of other good stuff coming out to keep me entertained and stress free, even if ir is only momentarily.