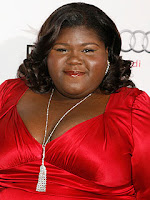 Gabourey Sidibe and Alan Alda were the most entertaining aspects in Tower Heist with Ben Stiller and Eddie Murphey. If they had Murphey in for the funny factor, he fell short. He played a one dimensional, stereotypical character that only made me laugh in his one scene with Sidibe.

Okay since Tower Heist was supposed to be a slap stick comedy, there really is not much to say about characterization and depth, but Alda played his deceptively evil Shaw well. I hated Alda's Arthur Shaw and hoped that he got what was coming to him. Sidibe on the other hand had me laughing every time she made an appearance. Her comedic timing and delivery was on point. I enjoyed her in Tower Heist, a comedy about a hotel manager that plans to steal back the retirement savings that was embezzled from his employees.