Who are you Anthony Mackie? 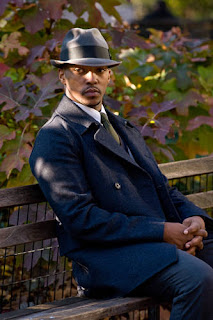 One of my favorite movies last year was The Adjustment Bureau and in it was this hottie Black dude. Then I spotted him in another fave, Real Steel. Interest peaked, I wanted to know who he was.

Mr. Anthony Mackie has been around but totally under the radar ... well, my radar. He played Papa Doc in 8 Mile and had various roles in several pictures over the years (Tupac in Notorious). Look, I might be the only person that did not watch The Hurt Locker, so I am not aware of his wonderful performance okay.

His performance in The Adjustment Bureau was heart warming and credible. He has several projects coming up over the next year. I hope he has made some good film choices because he seems to be at a good point to get to the next level. Did I mention he is a cutie too ;).

He is not without a little bit of controversy though.