The fate of the galaxy rests in the hands of bitter rivals. One, James Kirk, is a delinquent, thrill-seeking Iowa farm boy. The other, Spock, was raised in a logic-based society that rejects all emotion. As fiery instinct clashes with calm reason, their unlikely but powerful partnership is the only thing capable of leading their crew through unimaginable danger, boldly going where no one has gone before (Yahoo Movies).
If you love action then this movie is one to see. Even if a person never watched Star Trek before, this new installment of the franchise is worth watching. The pace of this movie was just right. It had a mixture of everything thrown into the bowl: a little bit of comedy, romance, lots of action, pain, and bravery. The cast assembled to take on the roles of characters some people are all to familiar with were right on target. Special effect were seamless. I did not once stop to think about the graphics; that is a good thing. Everything flowed together.
Now if a person is a fan of the Star Treks of old, they will pleasantly be surprised. I actually had fun putting (it has been a while since I watched any Star Trek series) all the pieces together.
The Players (not all of them though):
Chris Pine as James Tiberius Kirk did a great job. He started off as a very annoying little jerk but grew into the arrogant Captain Kirk that watchers have loved over the years. His rugged looks were actually perfect for the role. His acting was sound. Actually everyone's acting job was great, so we will get that out of the way.
Zachary Quinto as Younger Spock was fabulous. I watch Heroes, so I am a little biased, but he really did do a great job. He was bad ass.
John Cho as Hikaru Sulu. I don't have anything spectacular to say. I was glad to see him. I liked him as Harold (Harold and Kumar).
Simon Pegg as Montgomery Scotty Scott added just the right amount of comic relief.
Winona Ryder as Amanda Grayson was so good that I did not even know it was her until I look it up. She was not on for very much but she was convincing.
Zoe Saldana as Nyota Uhura/ Nyota Uhura was the perfect choice for this role. After watching her in action, I could not imagine anyone else playing Uhura. My brother thought that they had her following her man around too much (I think his exact words were "like a puppy dog") but I thought it was appropriate. She did a great job. Although it was not a standout performance, it fit right in with the rest (mind you, they were all spectacular). She conveyed great emotion.
Karl Urban as Leonard Bones McCoy delivered the infamous "Dammit man" line with convincing energy. Loved him.
Tyler Perry as Admiral Richard Barnett. It was a cameo role but I was still suprised to see him. I forgot he was supposed to be in this movie. Go TP. There is a person who is not worried about having a big time ego and being too good for small roles because he is some big time producer in his own right bringing in bank. 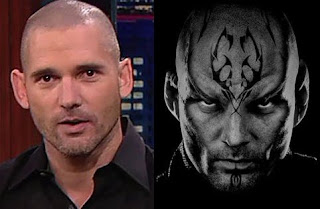 Eric Bana as Captain Nero/ Nero. I have to say that I saved the best for last. Why do we love to love the bad guys? Eric Bana did an unbelievably awesome job. He was convincingly evil in a tortured soul kind of way. The boy pulled it off! He commanded every scene that he was in. His anger and pain jumped out of the screen right into your lap. I would not want him as an enemy in ten lifetimes. Eric Bana definitely stole the show.

Okay, as I right this, my husband is walking around, pretending to be Picard from Star Trek: The Next Generation in an accent. LOL He is killing me.
Star Trek (2009) A
Movies reviews