Will and Jada Smith Stay Working

April 24, 2009
The Smiths stay working, don't they? I am especially interested in the HawthoRNe show being that it is about nursing (my soon-to-be, in about a year, profession). On a side note: Is it just me or does Jada look like she needs to be fed? I mean sister girl (and I think she is absolutely beautiful) is looking on the starved side lately ... I'm just sayin'. 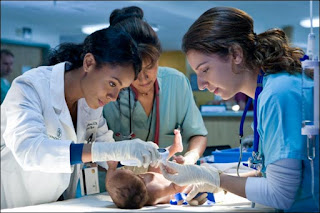 From TNT.com
Following in the footsteps of Kyra Sedgwick in The Closer and Holly Hunter in Saving Grace, Jada Pinkett Smith (The Women, The Matrix Trilogy) is the latest actress to bring her talent to TNT’s arsenal of strong, complex female characters. In this character-driven medical drama told from the nurses’ point of view, she stars as Christina Hawthorne, the forceful-yet-caring director of nursing at Richmond Trinity Hospital. When a patient’s care is at risk, she will not hesitate to violate hospital protocol, defend her staff against egotistical doctors or firmly stand up to apathetic administrators who seem to have forgotten a hospital’s true purpose. Recently widowed, she also has to take on her equally important role as a mother to a willful, rebellious teenage daughter. Pinkett Smith heads a diverse cast that includes David Julian Hirsh (Lovebites), Michael Vartan (Alias), Christina Moore (90210) and Suleka Mathew (Men in Trees). She also serves as executive producer, along with Emmy®-winning creator John Masius (St. Elsewhere, Providence, Dead Like Me) and Jamie Tarses (My Boys).
Jada Pinkett Smith Television Will Smith