April 09, 2009
I am attempting to turn over a new leaf in my quest to be a better person, so I really do not want to diss anyone, right. Therefore, I am going to attempt to comment on this piece of news without dissing Cuba Gooding Jr.

The fact is, I would be worried if I were Terrance Howard ... Actually, I would be worried if I were George Lucas. Cuba Gooding Jr. has only put out crap (this is not a diss, proof is in the pudding) movies since he won his Oscar so many moons ago. He has not had any block busters and has had more flops than an Oscar holder should. And let's face it, Terrance Howard has been doing alright but got full of himself after the whole Iron Man (btw, Iron Man 2 started filming and I'm too excited) debacle. 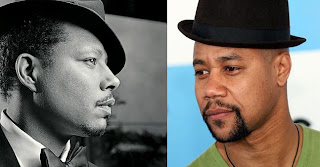 I am sure George Lucas is not breaking out in a sweat, but he better have something spectacular up his sleeve. I'm just saying ...

SRS5668 said…
I am glad you refrained from dissing Mr. Gooding, Jr. I actually think that he is an outstanding actor. He just isn't bankable these days. Which kind of makes him do what all working class people do - take any gig that will pay the bills. Hey I know the feeling! I have seen him in two independent films recently and he was outstanding. He just doesn't have a body like Jamie Foxx or a face like Denzel or both like Will Smith. Hey what can he do? But that Terrence Howard is the one that makes my arse ache! He is an arrogant arse and he is lucky that he is still being allowed to work after the whole Iron Man debacle. But again like the working man he found out via the grapevine that he was being replaced. At least he didn't have to work all day just to be tapped on his shoulder and handed a box at 4:59 pm and asked not to return. OK???
April 10, 2009 at 11:03 AM

Me said…
You know what Steph, you are right. Cuba is a good actor and I can't fault him for paying his bills. I am keeping an eye out on his brother though. That boy has got some charisma. Now about that Terrance. Can we say Bitchassness (in the words of Diddy LOL). I am going to love watching Don Cheadle in Iron Man 2 anyway.
April 10, 2009 at 11:22 AM

SRS5668 said…
Yeah. Don Cheadle is going to rock! Ijust saw some Don Cheadle movie when he is a supposed terrorist. Can't think of the name rightnow but he wa Soooooo good!
April 10, 2009 at 11:44 AM