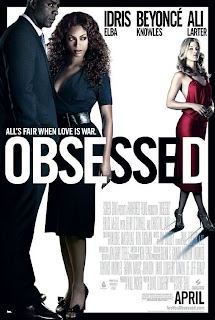 Derek Charles (Idris Elba), a successful asset manager who has just received a huge promotion, is blissfully happy in his career and in his marriage to the beautiful Sharon (Beyoncé). But when Lisa (Ali Larter), a temp worker, starts stalking Derek, everything he's worked so hard for, is placed in jeopardy.
Okay, so that was the technical yada yada on this already told story. If you have seen The Temp, Play Misty for Me, and the most notable and very successful Fatal Attraction-all great movies- then you have seen this movie. I guess they figured we have never seen it done the “ethnic” way. And trust me folks, we still haven’t. Idris, who I am obsessed with myself, plays the stereotypical deer-in-the headlight male who has no clue, so for one whole hour we watch his stupidity escalate. But he is so good-looking you cannot up and just leave the theatre. Beyoncé is … a singer… and probably should stick to it. Sorry … I digress. I really should give Ms. B a little more credit. She actually had a few great scenes in the last 22 ½ minutes of the movie. She started to act like a sister would in this situation but by the time she did I was ready to go. The real performance in this movie was by Ali Larter (Heroes). She made me believe that she was really delusional. Her character had a plan and she stuck to it no matter what.
The movie was just too predictable. Woman sees Man. Man is nice to Woman. Woman fixates on Man. Man is married and does nott tell Wife about Woman’s shenanigans. Woman starts to destroy Man in her attempt to have Man. Wife finds out. Man acts stupid. Woman tries Wife. Wife takes care of it. End of story. Sorry; I wish there was more but there wasn’t. It just goes to show that a Handsome, Fine Man and Beautiful Woman do not a good movie make. I give this movie a C-. It is a flawed copy of some really great movies…but hey Beyonce is in it!
Rating: C-
Reviewed and Written by Stephanie Seawright
Beyonce Idris Elba Movies reviews