April 09, 2009
If Katherine Heigl, one of the Grey's Anatomy stars, were on a political campaign, she would be called a flip flopper so fast she would not know which side was right. First she wants to be off the show, now she wants to stay on "if they will have her." Now that her character has some touching scenes and action with some teeth, she wants to stay right. 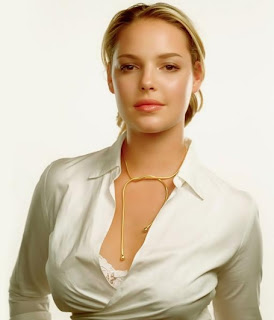 I am all for making sure a person gets what they feel they deserve and ensure that they are not taken for granted. I understand that an actor has to make sure that she is not placed on the back burner. I just think it was tacky to announce that she wanted to leave because she was not happy with her character then do a 180. Wasn't there a different way this could have been worked out?

Mind you, I am not attempting to hate on Heigl. I really like her and remember her from her Roswell (I really loved that show) days. I loved her on 27 Dresses too. I just think her behavior (if the reports hold true) is a little bit on the tacky side.

Anonymous said…
The only people who have ever said Heigl wanted to leave are the press. You wont find a single quote from her to that effect.
April 10, 2009 at 7:27 AM

Me said…
I would like her to stay. I like the original cast of the show. But the whole thing with her leaving came out with the contract dispute issues that were put out in the press. She was not happy with her deal (I don’t blame her though) and unhappy with the lack of material her character got (evidence by her statements when she dropped out of the Emmy running) so she dropped out of contract negotiations. That’s when Touch Tone came back with the statement that they had her for at least 5 years whether she wanted to get out or not. So whether it was a tactic or whatever, she, at one point, wasn’t planning on sticking around. This all went down last year. She basically told everyone who would listen how dissatisfied she was with her character when she denied the Emmy nod last year too. All that was posturing in my opinion and tacky.

SRS5668 said…
Who cares?! The show shouod have ended a season ago. I agee with Me though. It is tacky. She is alright. She isn't that great to be making a whole heck of demands in my opinion. Besides when she denied the Emmy nod she should have been written out then. The Emmy isn't just for her it is a representation of the show itself. They should have her die in her sleep on the first new episode without one word of dialogue!
April 10, 2009 at 11:16 AM