Box Office: The Soloist comes in at #4 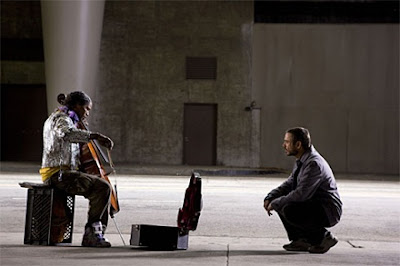 The Soloist starring Jamie Foxx and Robert Downey Jr. came in the box office top five at number four. Now was this because of the Miley Cyrus rampage backlash? I am sure that and the fact that the film is a drama and that it was in about 500 theaters less than the number one box office holder (Obsessed) has something to do with it.
If is because of the Miley mess, I think Foxx got screwed. Regardless, I heard the film was great and that both actors did a fabulous job.
Jamie Foxx Apologizes after Miley Lashing
Movie Review: Obsessed starring Idris Elba, Beyonce Knowles, & Ari Larter
Celebrity News Jamie Foxx Movies Robert Downey Jr.