March 04, 2009
Many republican states are refusing the stimulus funds allocated to their state by the recent passage of the stimulus bill. I am not a financial savvy guru or anything like that but I think I have a problem with my representative turning money that can potential help me out away based on not what is right for the people struggling in your state, but based on an ideological difference that was defeated with the passing of the bill in the first place. Hmmm, I think that is called holding on to a grudge, is it not? Since most Republicans are conservative Christians, you would think they would shy away from the whole grudge holding thing … then again you would think that their states would not be the top ones down loading porn- sorry, I’m a little off track.

All I am saying is that the deal has been closed; the money is available; your state needs that money; take it! I know that we as a people, in general, have a problem with the concept of extra money because we tend to treat it as if it will continue to flow. However, this is extra money to fill in the gaps and jump start economic activity if it is used properly. I would think that Republicans would understand this basic business concept: you have to spend money to make money. I understand that their problem is that the expense is being done by the government; however, we’ve tried giving boat loads of cash to the businesses and that didn’t quite work out so well. 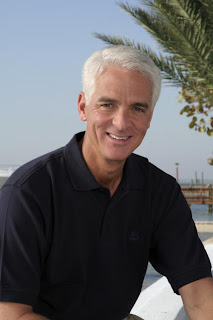 Charlie Christ, republican governor of Florida , is taking the heat from his party, but he is not a fool. He will take the money and attempt to make it work for Florida which has taken a considerably economic hit in the housing and tourist sectors. Christ is setting himself up as, maybe, the softer republican. The republican who can still hold on to his core values, work for the people and work with the new administration to set himself up for the future. Against the backdrop of Rush Limbaugh, he may have a fighting chance of stepping away from the party in a more positive light that gives him the power of the people, a strong bargaining chip in the games of politics.

Oh, and lastly, since I live in Florida , for all you other states that don’t want some of that stimulus money, send it over to Charlie’s way.
Republicans are trying to find a voice and a direction
The Miami Herald
The governor's annual report card on the state of Florida exposed the nationwide rift in the Republican Party over whether increased government spending will repair the economy. BY BETH REINHARD AND MARY ELLEN KLAS Comparing ideals to stars, ...
Political