March 11, 2009
Ashlee Simpson will be doing television. I do not watch the new Melrose Place even though I used to be all up on the old version. I am a bit curious about how she will do on the show. When she was doing her MTV show, before her first album dropped, I could barely tolerate her; when her album came out, though, I was pleasantly surpised that I liked a lot of her singles. Who would have thought that Ashlee Simpson would have a better music career than her sister, Jessica Simpson. 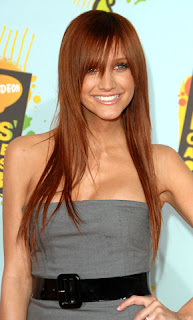 I am loving her new hair color. I wonder if she will stay red for the show.
A New Tenant on Melrose: Ashlee Simpson-Wentz
People Magazine - ‎57 minutes ago‎
The real-estate market may be sagging in real life, but it's looking up on TV: The CW has reportedly signed a deal for Ashlee Simpson-Wentz to move into Melrose Place .
Celebrity News Jessica Simpson Television