The Harder They Fall

The Harder They Fall 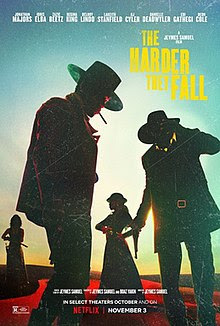 Netflix is now streaming The Harder they Fall, starring Idris Elba, Zazie Beetz, Regina King, Jonathan Majors, LaKeith Stanfiled, Delroy Lindo, and Danielle Deadwyler. It is a black western film that uses real-life black historical western figures but in namesake only. Before I discuss the movie, let’s get the supposed controversy out the way first. Yes, the main characters were named after real black western people. No, this is not a biopic of said persons lives. They took a huge use of creative license here. The director has shared this in many interviews. So the actors playing these characters will not look like them, have the same exact storyline, or even be age-appropriate.

I appreciated the introduction of these figures and went on to look each of them up myself. They are all fascinating in their own right and each deserves an actual biopic of their lives. I would definitely be in line for that if done well. With that being said, The Harder They Fall is for entertainment purposes only. Anything beyond that is up to you to get yourself educated.

The movie is basically all about the revenge of one outlaw against another. Nat Love hears that the person who wronged him so egregiously, Rufus Buck, has been released from prison and he is not having it. He and his band of friends along with a lawman decide to go after Buck to stop him once and for all.

I thoroughly enjoyed this movie. It started off capturing my attention by introducing Buck as an unredeeming villain. He and his whole gang were basically unrepentant psychopaths with Trudy Smith, played by Regina King appearing to be one of the most unhinged. I will say that the train scene was a whole flex, but the unabashed arrogance of Buck’s gang just continued to grow in spite of some setbacks to Buck's goals. Idris Elba knows how to play a villain and Buck was no exception. There was not an ounce of redeeming quality about him or his crew. 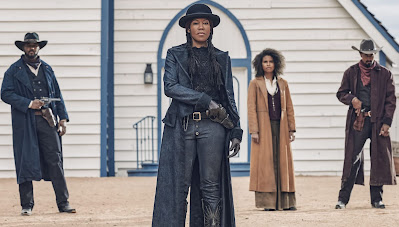 The acting in the film was on point. All of the actors came through with their A-game. I do not normally care for Westerns but I have found myself watching more (Cowboys and Aliens ... don't judge me) than I care to admit over the years. I was glad I decided to watch this one though. The scenery and cinematography only enhanced the storyline. I thought the pacing of the film was well put together. There were some blatant plot points that needed to happen to move things along, like Stagechaoch Mary basically surrendering herself (which was not very bright on her end) that probably could have been written better. In the end, it all came to a climax with a good old fashion western, all-out gunfight as it should.

Definitely recommend taking the time to watch The Harder They Fall.