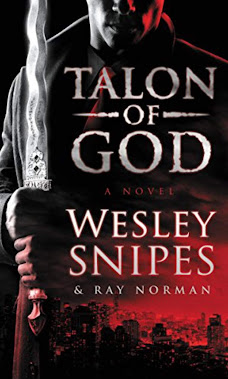 Talon of God written by Ray Norman and Wesley Snipes was released a few years ago and I have been so off my reading game that it went under my radar. I finally had the opportunity to read it and I have to say it was an enjoyable read.

Right off the start, I was drawn in. The book follows Lauryn a new doctor who comes across a drug that’s tearing the city of Chicago apart. Little does Lauryn know, her destiny is to work with Talon Hunter, a warrior of God, to save not only the city but all of humankind. Lauryn who although raised by a preacher is not a believer and has to overcome the aversion to things of a spiritual nature to face the literal demons that are working to take Chicago over.

The novel was well done. The storylines flowed into one another intertwining the medical, criminal, and spiritual worlds together to not only move the story along but also keep the reader interested from different perspectives. I found Lauryn to be slightly annoying at times especially in her relationship with her brother. However, they did attempt to redeem her later on as she realized her role in his downfall. The characters were all pretty strong with faults of their own. Talon may have been the only one that was without reproach. But I think the characters were realistically written. We as people are only doing our best and all have our own personal issues.

On the flip side, Norman and Snipes, did evil good. The antagonists were despicable and relished it. They did not care one iota about any human lives but themselves.

One of the recurring themes of the novel was the power that fear has over our lives. In this tale “the devil isn’t known for playing fair. That’s why despair and fear are his greatest tools.” What was most interesting about this part of the conversation between Talon and Lauryn was the focus on how we view ourselves and whether or not we think we can be redeemed.

Once you break free from fear though, there is no limit to what you can do by allowing yourself to access your potential. This is what happened with Lauryn put away her fear and took hold of her faith. She was able to accomplish more than she ever thought possible.

“Rise,’ the angel commanded, ‘and take back what the enemy would steal.”

No matter what your faith or belief, the fact that fear is used to take hold of us and take away what we are worthy of is a common theme. In this novel, they refer to fear as “the devil’s rope.” The only way to overcome and succeed is to overcome it.

Talon of God gets a B