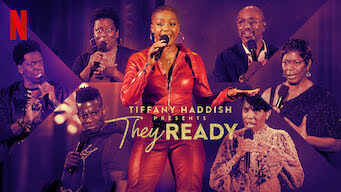 Tiffany Haddish returned to Netflix with They Ready Season 2. I am going to be honest here, I did not get through the first season of her special. Nevertheless, I am really excited that she has done this and is bringing other comics up to a wider audience. I did get through the entire seven episodes with the last one being an interview-style aftershow. Tiffany Haddish looked great in her Eddie Murphey Delirious-inspired outfit as she introduced the comics to the stage.

Godfrey kicks season 2 off with an enjoyable set. It was not gut-busting funny but he was funny and had a few really good jokes. He relays his jokes as if we are having a conversation in his living room. I have enjoyed his skits on Instagram but had never seen his standup. I am glad I got to see his set. Godfrey’s jokes were timely and relevant as well as relatable. Definitely watch the Godfrey episode. I believe you will enjoy it more than once. In my opinion, his was the best set.

Erin Jackson is the second comic to perform, and I was like, “Okay, Tiffany, you coming through with the comics this season. Come through sis!” Erin’s set was funny. It took a couple of jokes for me to get the full appreciation. She was relatable and had a variety of jokes. Her delivery clean and enjoyable.

Tony Woods’ episode was a treat. How do we not know this guy? Apparently, he has had some influence on many of the amazing comedic starts we know now. I took a look on his Instagram page and saw many pictures of him with the big players like Dave Chappelle and Kevin Hart just to name a couple of them. I really enjoyed his performance. He is an easy storyteller and I would put his show ahead of Godfrey’s for this season. I had several laugh-out-loud moments.

Kimberly Clark and Barbara Carlyle were not funny this time around. I think I may have chuckled once between the two of them. Kimberly was more like a nice conversation but not at all funny. Kimberly’s blouse was fire though. She looked fabulous to give a bevy of subpar jokes. I liked her delivery but her material was off the mark. Barbara Carlyle’s performance was full of regurgitated jokes we have already heard but they were not funny either. I am looking at the audience like are they for real with their laughter?

Dean Edwards is the last performance. His build-up was well done. I laughed throughout his set but was definitely impressed by his impressions towards the end of his set. Tiffany Haddish mentioned that he has performed on Saturday Night Live (SNL) but I do not remember catching him on the show. I did not watch it regularly enough.

So unfortunately I would skip Kimberly Clark and Barbara Carlyle’s episode and watch from funny to funnies, saving the best for last.

Check out the Trailer
Check the review out on Youtube