Showing posts from April, 2011
Show all

I miss V. I miss Ana’s facial expressions and the treachery and plotting that goes on. I watched it in the 80’s, but truth be told I do not remember much of it. On that note I cannot believe that Tyler is dead. V left of with the world under the influence of Bliss, Tyler dead, and Erica now on the inside. I am hoping it comes back because it would be a shame to be left hanging like that. I know I cannot be the only one that is excited about the return of So You Think You Can Dance ! This is probably the only show that I will try to watch in real time. It is set to return May 26 th and either my DVR or myself will be ready. Heros who? Remember that NBC show with Sylar and the cheerleader? I vaguely remember it. I cannot say that I missed it because the last season was garbage, and I voluntarily stopped watching it. But I have been missing people with super powers in my life. Now I get that fix with No Ordinary Family. I look forward to watching how it unfolds especially with Joshu
Post a Comment
Read more

Blood Colony by Tananarive Due

Tananarive Due’s final installation to her immortal series, Blood Colony , does not disappoint in the least. I am secretly hoping that she does not end it here because I soooo want to find out what happens next, even more so now. In this installment, Fana is an impetuous teenager that breaks free from her parents’ protection to experience life on her own as danger and evil trail closely on her heals.   I cannot say anything more about Due’s ability to craft and intertwine a compelling story more than what has already been mentioned from her other two books in this series (see reviews). Due pulls you in to the intrigue of her characters further and further with each turn of the page. There is action, annoyance at a teenager’s know-it-all antics, parents’ worry about their children, hope and many other emotions that the reader will experience on the adventure with Fana. Once again, Due has cultivated a wonderful addition to the immortals with Blood Colony.  Search Amazon.com for Ta
Post a Comment
Read more

Let us face it, Nicki Minaj’s album, Pink Friday , is by no means a classic. Years later it is not going to be remembered as ground breaking or significantly impacting the rap/hip-hop game. However, it is definitely entertaining. More than that, her selections are actually introspective and thoughtful. The album tells the story of a female artist going for her dreams and the vulnerable moments she experience in that process. She has those brash in your face moments but they do not eclipse her more vulnerable side, which I found to be more genuine. Overall, I enjoyed the album. With that said, Nicki Minaj’s attempt at image exposure undermines the positives that exist in her album. It is more like the spectacle and demonstrations she attempt to personify is a poor caricature of herself. Track 11, Dear Old Nicki, calls for the resurrection of someone she lost in the process, and I am thinking find her quick because she has to be more grounded than the chick running around in pink wigs
Post a Comment
Read more

April 07, 2011
It looks like they did a good job with this, so I am looking forward to it. And let's be honest, I want to see Ryan Reynolds in a tight green suit, hehehe.
Post a Comment
Read more

Sweet Mickey is the President of Haiti 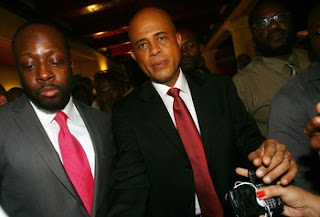 It is a little weird to say that Sweet Mickey is now the president of Haiti. In respect for the presidency of this struggling country and in hopes that he is earnest in his efforts, I will come respectful and correct by saying Michel Martelly has been elected the new president of Haiti. Wyclef Jean left and Martelly right I will admit that I was adamantly opposed this him running and his campaign all together as I was when Wyclef Jean attempted to have his name placed on the ballot. However, I am not dogmatic in my opinions on this matter so I was open for discussion. My reasons, I realize may have been somewhat elitist. I thought that their running made a mockery of the elections and was a joke. They had no formal training and no “official” political experience. What nerve did they have to run for such a high office? However, why not? Let’s face it, I think the presidency has already been made a mockery of enough with candidates that are supposedly qualified taking office and
Post a Comment
Read more

The Testament by John Grisham

John Grisham has a brash, in-your-face way of telling his stories, and I enjoyed his style even more in The Testament . The Phelan’s are a spoiled, greedy miserable excuse for wasting air, led by their even more selfish father who leaves a fortune to an unknown and non to his miserable children. From the start, I enjoyed the story and could not wait to find out who really ended up with the money. Grisham makes the story even more interesting by throwing in colorful, corrupt attorneys. Set against two contrary back drops, the fast pace city and a remote Brazilian jungle. Truthfully, I was entertained by the obscenely spoiled grown children, but had to grapple with Grisham’s statement against modern cultures propensity towards irrational greed and materialism. Some how, amongst the offense of 11 billion dollars, Grisham manages to illustrate that there are indeed some things in this life that are valued more than money.
1 comment
Read more

Holy moly Batman! I was not expecting this Cee Lo Green's Lady Killer to be so freaken hot! First of all, I know I am late on this because some of you been had the album, so this is for those that looked over it thinking there’s only the one hot track, “Forget You.” But no! The album is definitely one to get. I even like the intro forgoing the fact that Cee Lo Green really is not a lady killer (let’s be honest here). The best: Track 12- Old Fashion because it is old school, romantic, and sweet. The worst: I can’t name one because I don’t have the urge to skip any of the songs.
Post a Comment
Read more

In The Living Blood by Tananarive Due tells the story of Jessica, a new immortal, and her amazing immortal daughter, Fana; and how she must come to grips with the power that runs through her daughter’s veins while dealing with those who would stop at nothing to get a drop of blood for their selfish, evil purposes. In the aftermath of a traumatic loss of what she once thought was a perfect family, Jessica has made a commendable effort of making some life for herself and her daughter while using her “gift” to help others. However, she does not anticipate or plan for the ultimate need for her husband and his “kind” to help her deal with Fana and her uncontrollable powers. First off, it must be known that I cannot stand big books; however, The Living Blood is an exception to that. How could I ignore Dawit and the aftermath of his mortal daughter’s death and wife’s, Jessica, resurrection with a newborn to boot? To say that the story has twists and turns is an understatement. What is wo
Post a Comment
Read more
More posts